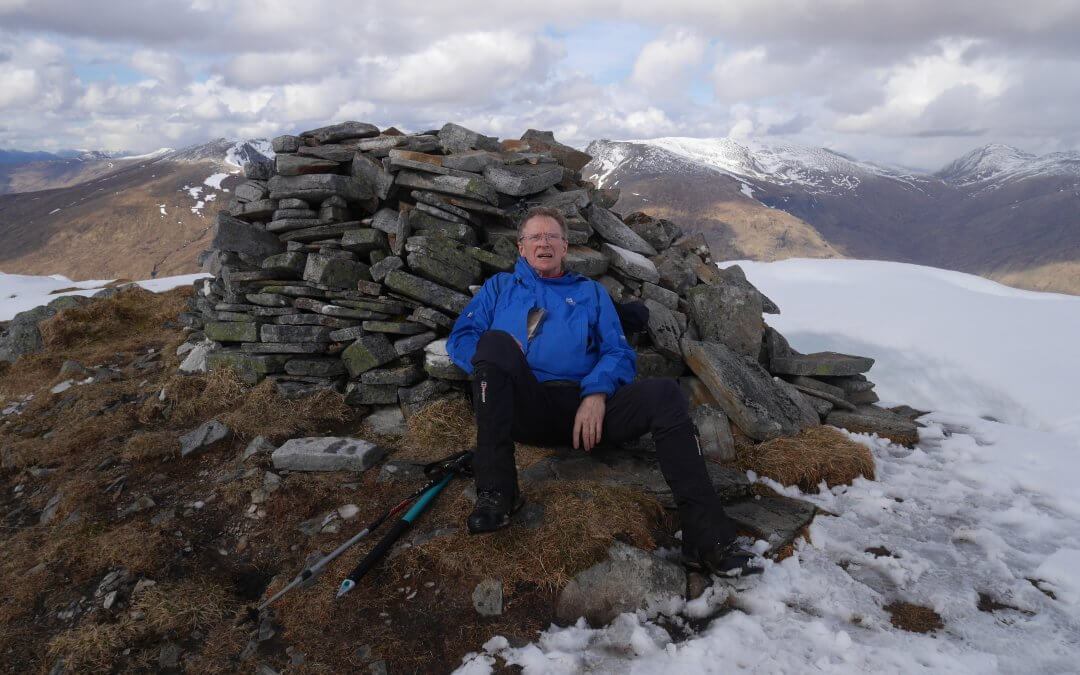 So a SCC contingent were in occupation of Strawberry Cottage 26th/27th April, all except for Janic & Mike who were in a different time zone and were there Thursday and Friday instead. They spent the Friday on Ceanrathan.

our 5 star accommodation for the weekend 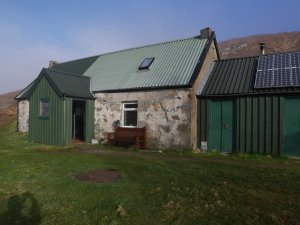 The usual tentative soundings were taking place in the car going up (an indifferent Friday forecast had made some of us decide not to leave too early) and an idea formed.

So this weekend was going to be a day of atonement for Colin, accompanying George on his quest for Beinn Fionnlaidh. Ashes were readily available from the bothy stove, whilst soft shell would have to substitute for sackcloth.

Estate rules mean that hut parties are allowed only two cars, one journey each way. After mustering at the Slater’s Arms, a high speed (thanks Stewart) procession headed for the car park where the cocktail cabinet, barbecue etc were transferred and the requisite two cars set off up the very stony track, leaving five of us on bikes of varying suitability and comfort, arriving at the hut around 9pm just as dusk was falling.

Just getting to the hut is part of the adventure of Strawberry Cottage.

Next morning, Eric, George and Colin duly set off for Mam Sodhail in a cool breeze and mainly bright sunshine. No hurry (or so we thought) so we stopped frequently to inspect hydro works or wildlife as we went.

A sunny (but nice and cool) wander into Coire Leachavie led steadily upwards towards an intimidating headwall with an all too visible headwall. Just above the snow line we found a cosy boulder to have second breakfast on (or behind) and pondered our options without much resolution.

Eric & George apparently discussing which way is up…. 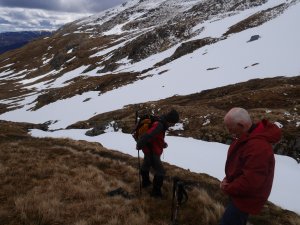 Higher, though, an enticing snowy ramp led obliquely upwards on the north (south facing) wall of the coire exiting onto a nice wee hollow on the ridge above us. Round about now Eric had second thoughts about his stamina (or in the light of what was to come, maybe a sudden rush of common sense) and left us, to stroll back down the coire and put his feet up at the hut.

Colin and George it was, then, who set off up the suddenly steep snow slopes, snow soft enough for a kick and an ice axe plunge to get you steadily moving up the slope, emerging onto a spacious ridge with big views. A double take was necessary as we had emerged to the east of Mam Sodhail, rather than on to the south ridge, and it took a couple of minutes to work out that we had to turn left rather than right. Views were magnificent in every direction, Skye basking in the sun and the Ben offering an unusual perspective, looking like a big wall in the middle distance. In every direction a chaos of peaks and ridges, with little sign of human influence. 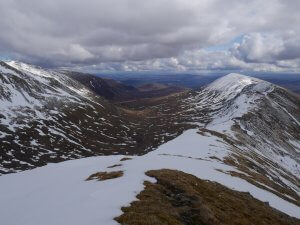 Sgurr na Lapaich to the right, Tom a’Choinnich and Toll Creagach to the L. Andy, Dave & Kenny somewhere over there.

All too soon the top of Carn Eige was dealt with, and with penitential thistles in nether garments, Colin set out on the atonement bit of the day, down and down to the 810m col before Beinn Fionnlaidh, all too aware that most of the height lost would have to be re-scaled. Fionnlaidh is surely in a different part of Scotland from the rest of the day and we perched looking north at yet another An Socach towering over Loch Mullardoch. And the ridge from Ceathreamhnan to Dheirigan looks so long from here!

As we turned south at about 6 pm, Davy, Andy and Kenny were probably turning south from Mam Sodail about now having come over Tom & Toll to get there. Here is what they missed by not doing Fionnlaidh.

Tiredness was kicking in and stops were becoming more horizontal. We had left rucsacs just below the summit of Carn Eige (although controversially the Walkhighlands website suggests a rising traverse across the west flank of Carn Eige, on what looked like quite inhospitable ground) so we had no option but grind out the 370 metres to their resting place. Down again, then down a bit further to try for the remnants of stalkers’ path bypassing Mam Sodhail and apparently curling across to the col under An Socach. There was the path… then it wasn’t… then it was – gently descending into a hanging coire which had a rocky headwall and no obvious way past to get to our objective, where we knew there was a stalkers’ path which would take us nicely down halfway between Strawberry Cottage and the youth hostel.

Instead, we had two miles of tussocky, bouldery grass riven with innumerable gullies. A handful of them were deep enough to force us down towards the valley floor of Gleann a’ Coillich, looking across at the Dheirigan ridge beginning to tower over us. We reached the col, eventually, after a couple of hundred metres of renascent, as darkness fell at about 9.30pm and sure enough, there was the path. It was kind enough to keep its booby traps for the last couple of hundred metres but eventually we found ourselves on the stony, everlasting track back to Strawberry Cottage which we reached, shortly after being greeted by Mike, at 11.30 pm.

Just another Saturday…. By Bill Murray standards at least. 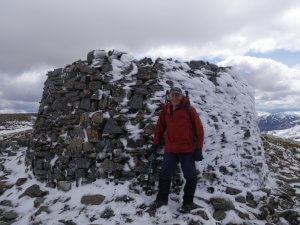 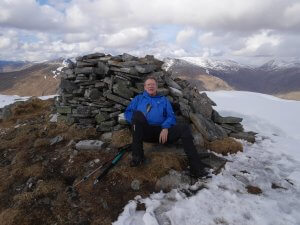 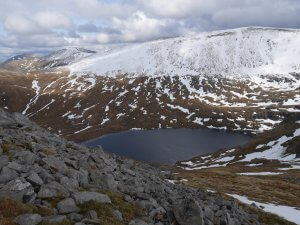