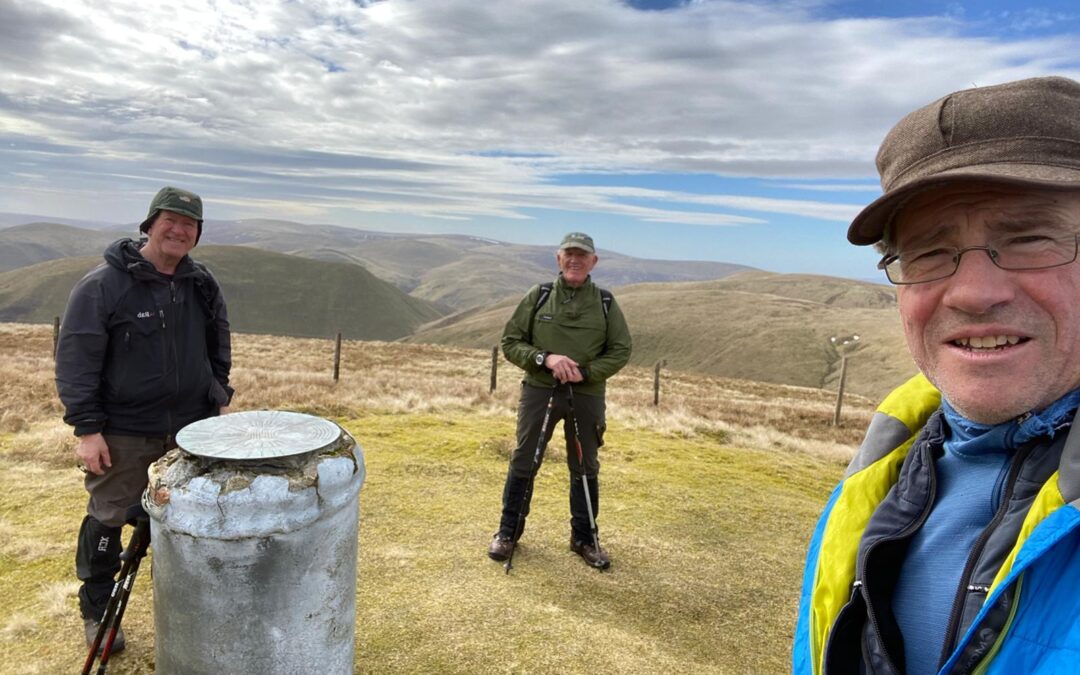 We three rolled up in separate cars at Wanlockhead – Lowthers to scale – covid officer on the case. Q. Is a meet which is open only to aged retirees who live within the county boundary an official SCC meet? We concluded that it was, and that we three represented the creme de la creme of Scotland’s premier climber’s cooperative. I will henceforth expunge further reference to Covid, noting only that Charlie ensured restrictions were meticulously observed.

We set off from the “Scotland’s Highest Village” sign, up a tricky grassy slope and avoided the awkwardly positioned empty green bottle of tonic wine at the top of the couloir. We noted its position carefully so that, if necessary, we could use it to guide us back to the cars, in the event of a later

whiteout – and ultimately to remove it for recycling. (It was empty before we came across it.) As we crossed the moor, on the route known as the Southern Upland Way, we scanned ahead for hazards among the upper snowfields. I thought of a video I had recently been sent featuring a past SCC member (JH) on an ascent of Central Gully on Nevis’ Creag Coire na Ciste. Conditions looked wonderful across the whole north face. I also thought of an account written by a current member (BB) of his exciting day on Giant’s Head Chimney (Lochnagar). I pitied them both, stuck in Highland and Aberdeenshire respectively, when Lanarkshire giants like Tinto, Culter Fell and Green Lowther were out of bounds to them.

Onwards and upwards, avoiding tarmac wherever possible, we eased onto East Mount Lowther. Frequent stops were to emphasize some point in the richness of conversation that passed among us, not to 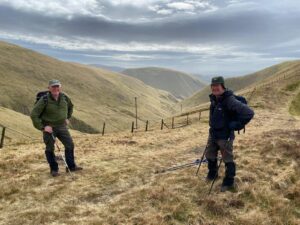 catch our breath – oh no! Were we not the creme de la creme! Delighting in our delusions, and moving on from conversation operational, past and future (knees/ backs/ shoulders, you know) we daundered back and up to the Main Mount, then took the impressive ridge to Green Lowther. Haze restricted distant views but the Ettrick Hills, Tinto, Cairn Table and further west, both Cairnsmores stood out. Closer, the Dalveen was deep and mysterious and the Daer Reservoir was delicately framed by Herr Siemens’ finest. Care was still required underfoot, one particular cattle grid required every bit of our collective years of experience. However it was quiet and the passing places were not needed. After lunch in the lee of an unnatural windbreak a saunter downhill and a wee bit of contouring brought us back to civilization; green bottle not required!! 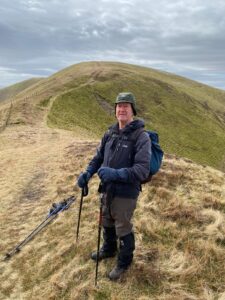 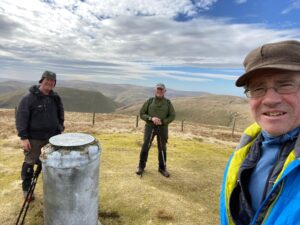 atop hills and their purposes) and hopefully I’ll see more eligible Southlanarkians on the next one.

Highlanders and Aberdonians can GTF. 😂