A Day out with Dave, by Billy Burnside. 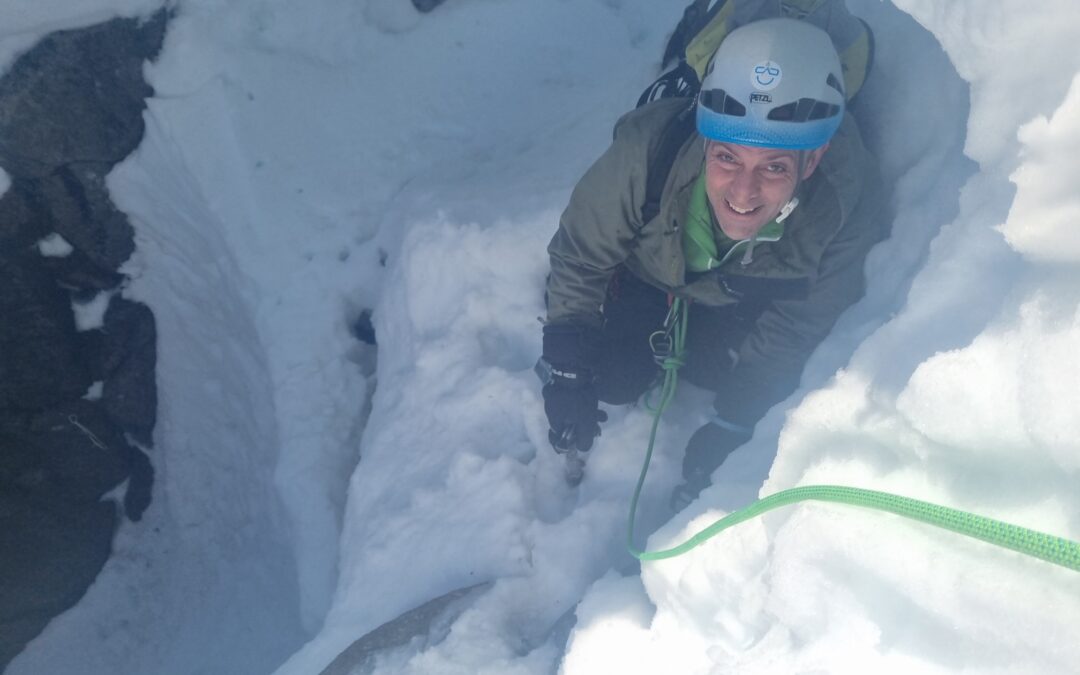 I had last climbed with Dave over 10 years ago I think….. a run of the mill ascent of Raeburn’s Gully on Lochnagar made memorable by events outside of the climbing. I had recently purchased my first Black Diamond express ice screw, you know the ones with the little flippy up handle that’s supposed to make life so much easier but doesn’t really help that much when you’re shiteing it on steep ice. I was very proud of this device and had, apparently, spent much of the previous evening in the freezing student’s bothy at Loch Muick stroking it like some kind of talisman. I distinctly remember looking down at Dave from the ice pitch on Raeburn’s and calling out jokingly, “Don’t drop the ice screw when you’re getting it out….its ma pride and joy.” You can guess what happened next….I still can’t bring myself to talk about it. We finished the route in a tense silence and I stormed off down the Black Spout to undertake a fruitless search for the missing screw, leaving Dave to navigate his way off the hill in deteriorating weather and me with the only map tucked smugly in my jacket pocket.

Dave and I had subsequently seen each other over the years at club gatherings and had been able to have a laugh about that day over beers. We even arranged a return match with Lochnagar a few years ago but I couldn’t get my new Corsa down a very snowy Glen Muick and we had to settle for a Corbett and a cake in Braemar. But finally, the stars had aligned and here we were trudging up the land rover track on a beautiful March morning with plans for a snowy gully day foremost in our minds. Dave confessed that he hadn’t worn crampons on steep ground since that fateful day ten years earlier but we both reckoned it’s akin to riding a bike ,albeit on a very slippy slope. 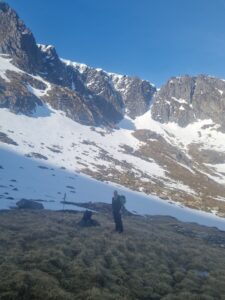 I couldn’t help noticing that his boots were a bit on the bendy side as we soloed up the entry slopes to the Black Spout, but he seemed to be bearing up admirably. I forged ahead aiming to set up a belay at the junction and had just done so when I became aware of an unusual noise floating up the gully….it reminded me of a puppy in distress….or a young calf separated from its mother. I would have thrown him a rope, but some self-serving idiot had given it to him to carry. A quick trot back down the gully and some words of encouragement saw him safely up to a fine perch right at the junction where he lashed himself to several nuts and pegs of dubious vintage and smiled gamely for the camera. I shot off up to the foot of Pinnacle Gully 2 to check it out as a possibility but one of the chockstones was totally uncovered adding several grades to its score I reckoned, so that left Crumbling Cranny, the highest route on the mountain.
I’d done it the year before with a guy from the rescue team called luggage because of his predilection for carrying big bags on the hill. Then it had been quite bare and a proper chimney lum kindofa thing, perfect for jamming yourself into. Today it was plastered with snow and had a large roof of cornice leering down on potential suitors. With Dave once more lashed to a collection of ironmongery I set off up steepish snow that became softer and spongier the higher I climbed. A big nut wobbled in between loose blocks on the right wall….a smaller one went in a gritty crack on the left wall followed by another one two feet higher just because I could. By now I was at the final snow wall that led up to what looked like a large accommodating ledge right beneath the cornice but getting to that ledge turned out to be no simple matter. Axes were driven in horizontally at arm’s length….feet stamped down over and over…..wrenching….pulling….pushing….floundering….like attempting to go up the down escalator while pushing through a porridge waterfall. Success came with persistence but turned out to be no success at all (apologies to Dylan for the borrow.) I crouched uncomfortably on my hard-won ledge searching desperately for something solid to bring me some comfort. Twenty minutes of continuous digging uncovered a rock which sported what I hoped was my salvation crack…nuts no good…knife blade in too easily….the trusty lost arrow pinged out on entry but was caught and re-inserted with heavy hammer blows. This gave confidence to engage in a bout of frantic chopping of the snow overhang and with the slimmest of slots cut…. a sideways shuffle…a thrown leg ….knees …elbows ….everything used for traction … I finally crawled into the glorious sunlight of Lochnagar’s summit plateau. 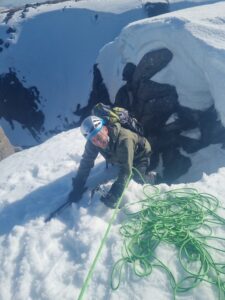 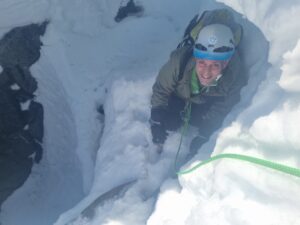 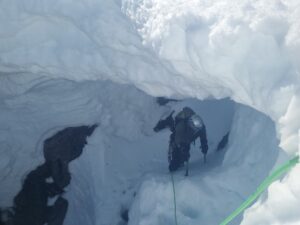 I took the time and trouble to cut a medium sized snow-bollard anticipating a good show to come and perched myself as close to the edge as I dared, camera in hand. Dave made good progress at first and managed to extract the first two nuts quite easily. However when he reached the steep barrier wall he found the third nut was out of reach and try as he might he couldn’t get traction to reach high enough…after a game effort he unclipped from the sling and pendulumed sideways into the middle of the wall…with a tight rope and copious encouraging shouts ….and plenty of photo opportunities… he heaved himself onto the final resting place muttering all manner of oaths under his breath. He did not like the look of the concluding moves….he said as much….repeatedly. I didn’t even have the heart to encourage him to try to retrieve the peg. He held his breath and shuffled sideways then up….axes in on the flat….pull….slither…..pull….slither….pull…..grunt….grimace….knees over the edge and slowly up to the sanctuary of level ground, grateful to be in that place. Kiss the earth…fist bump…cold tea and medals all round.
Ambling aimlessly down the track we talked and talked… about the day, life, covid, families, politics. It was a good day to be out…. We both said , “ let’s not leave it ten years again”. We both meant it.
Me, perhaps slightly more than him. 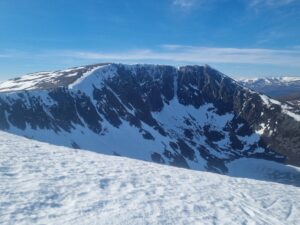